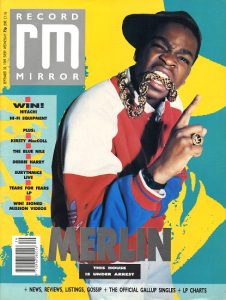 TOTALLY DEF
Debbie Harry is the patron saint of peroxide. Her eminence as the pop princess of the platinum pout – effortlessly outshining upstarts like Wendy James and Andrea Darling – is assured by the inspired title of her new album, ‘Def, Dumb And Blonde’.
‘Def’ is a reference to the rap and dance veins that thread their way through this, her third solo album; ‘dumb’ she certainly isn’t, but avoiding the dumb blonde stereotype isn’t easy when you look that good.
“At one time it was quite offensive, but I don’t think it bothers me any more!” says Debbie. “More often I’ve been treated as being stupid just because I’m female. With Blondie I was trying to embody a time and an attitude, and I was 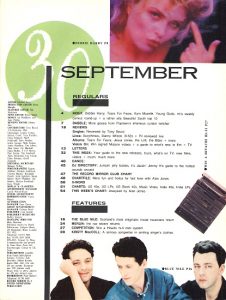 never really totally cutesy or totally sexy or totally aggressive, I mixed the three together. Compared with what’s going on currently, I think that my little attempts at sexuality were kind of pathetic!”
A nation of red-blooded males would disagree.

The first single, ‘I Want That Man’, is a liberated and gutsy little number written by Tom Bailey and Alannah Currie of the Thompson Twins. The assertive lyrics sound like they were written with the blonde bombshell in mind. 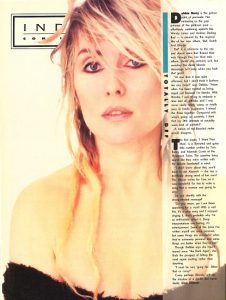 “I don’t know about that, you’d have to ask Alannah – she has a terrifically strong mind of her own! She always writes for Tom, so it was wonderful for her to write a song that a woman was going to sing.”
Do you identify with the strong-minded message?
“Do you mean, am I out there searching for a man? With a net! No, it’s a pop song and I enjoyed singing it, that’s probably why I’m so enthusiastic about it. Deep interpretations are limiting, it’s entertainment. Some of the lyrics I’ve written myself are more personal, but some things are wonderful when they’re extremely personal and some things are better when they’re not.”
Though Debbie says she hasn’t toured since “the Dark Ages”, she finds the prospect of hitting the road again exciting rather than daunting.
“I must be very ‘gung ho’. Either that or crazy!”
Crazy perhaps. Blonde, without the shadow of a doubt. But never dumb.
Lisa Tilston 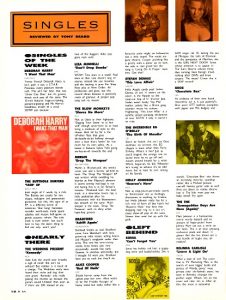 SINGLES OF THE WEEK
DEBORAH HARRY
‘I Want That Man’
CHRYSALIS
Yowza Yowza! Deborah Harry is, let’s spell it out, a S.T.A.R. Priceless, every platinum blonde inch. This ain’t her best, that was ‘Union City Blue’, but it’s groovy shlock rock pop all the same. The 12-inch features frogs-a-croaking, geetars-a-grating and Ms Harry’s breathless, dream of a vocal. SOTW just because… 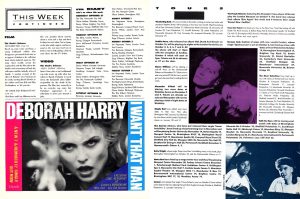 Debbie Harry, who releases her album ‘Def, Dumb And Blonde’ on October 16, will be playing six nights at the London Borderline on October 2, 3, 4, 6, 7 and 8. All the shows will start at 10pm with the exception of Sunday, October 8 which will start at 9pm. Tickets are at £6 in advance or £7 on the door.