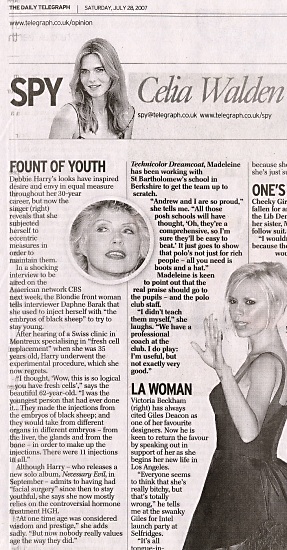 Debbie Harry’s looks have inspired desire and envy in equal measure throughout her 30-year career, but now the singer (right) reveals that she subjected herself to eccentric measures in order to maintain them.
In a shocking interview to be aired on the American network CBS next week, the Blondie front woman tells interviewer Daphne Barak that she used to inject herself with “the embryos of black sheep” to try to stay young.
After hearing of a Swiss clinic in Montreux specialising in “fresh cell replacement” when she was 35 years old, Harry underwent the experimental procedure, which she now regrets.
“I thought, ‘Wow, this is so logical – you have fresh cells’,” says the beautiful 62-year-old. “I was the youngest person that had ever done it… They made the injections from the embryos of black sheep; and they would take from different organs in different embryos – from the liver, the glands and from the bone – in order to make up the injections. There were 11 injections in all.”
Although Harry – who releases a new solo album, Necessary Evil, in September – admits to having had “facial surgery” since then to stay youthful, she says she now mostly relies on the controversial hormone treatment HGH.
“At one time age was considered wisdom and prestige,” she adds sadly. “But now nobody really values age the way they did.”